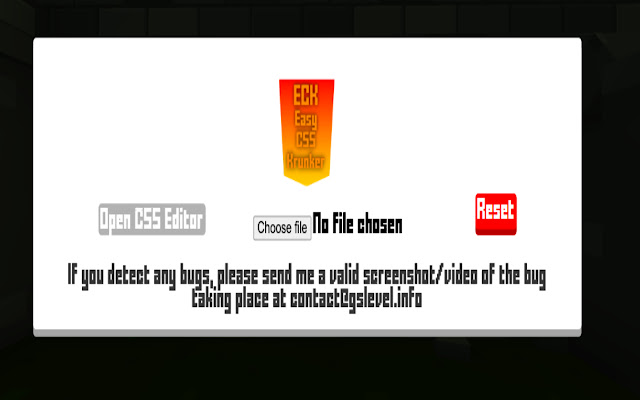 This is an extension, which makes putting a custom css in krunker, a lot easier, with less hassle.

[VERSION 0.0.8] Fixed a bug that made the CSS Settings window appear when clicking on any other menu buttons while being stuck on "Checking for updates".

com' subdomain into the extension.

So if you prefer to play krunker on that website, you can now use this extension with it! [VERSION 0.0.6] This is a big update, completely redesigned the CSS UI.

I won't explain it too much here, since you can just take a look at the photos.

(Changes apply for the main and social UI) There's now also a bigger CSS Editor, so you can easily see the code that you type in.

IF you use a custom CSS that hides the part that says 'Business, Terms,' etc, if you want to reset the CSS.

You'll have to press F12 to go to the developer tools.

Go to Console, and copy and paste the following: localStorage.

innerHTML = "" [VERSION 0.0.5] Once again, here's another update which doesn't open the CSS Settings (in the main game).

[VERSION 0.0.4] Fixes a bug which doesn't open the CSS Settings (in the main game), fixes a bug when you click on the settings icon on the social tab over and over again, each time a new CSS settings dialog pops up.

Also made the social css dialog a bit cleaner.

Mainly aimed to the people who don't know how to use the Krunker Resource Swapper.

Just go into the settings in krunker, and you can take it from there! You can use a custom css for the main page (the game itself), and the social page.

And don't worry about putting it in everytime, the extension does it for you!

- Offered by GS Level
- Average rating : 4.08 stars (liked it)
- Developer This email address is being protected from spambots. You need JavaScript enabled to view it.