GPTrue or False in Chrome with OffiDocs

GPTrue or False in Chrome with OffiDocs 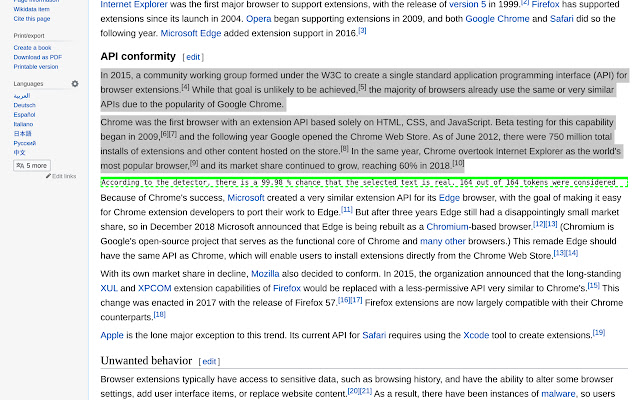 OpenAI's recently released GPT-2 model has revealed itself to be capable of generating incredibly human-like text.

With the rampant spread of fake news and reviews in today's world, such tools may pose a threat to the quality of the information found on the internet.

Luckily, OpenAI also released a detector which is designed to detect whether a given portion of text has been generated by GPT-2 or not.

This extension brings the detector to your browser via a simple browser extension.

Simply select a portion of text (at least 50 words) and the extension will determine and display the probability of whether the selected text was generated by GPT-2 or not.

Some notes: - The detector itself does not run in your browser.

co/openai-detector where the detector is publicly hosted and processes the response, displaying the results in your browser.

- Results should be taken with a grain of salt.

The detector is designed specifically to work with GPT-2 generated text.

Using a different model or finetuning GPT-2 could be enough to avoid detection.

In general, the detector is imperfect.

Human-generated text may be marked as GPT-2 generated, and vice-versa.

- Offered by Giulio Starace
- Average rating : 2.29 stars (disliked it)
- Developer This email address is being protected from spambots. You need JavaScript enabled to view it.